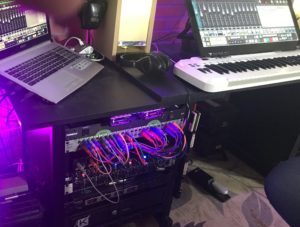 Clarence has been a music and audio lover since a small child. He was born on September 11, 1984 in Walla Walla, Washington, where, at ten years old, he first picked up playing drums that led to winning several music awards, including “Outstanding Soloist” for drumming at the Lionel Hampton Jazz Festival in 1998.

Shortly after picking up drums, Clarence got introduced to the technical side of music and audio where he started experimenting with digital multi-track recording. Clarence and his father, Ron Steele, founded Studio 79, where they have recorded numerous clients over the span of the studios evolving history of 8-track, 16-track, 24-track, and Pro Tools.

Clarence is Phoenix-based where he works as an audio engineer, drummer, pianist, composer, and producer. Click here to view some endorsements.